ECHOLASER Thermal Ablation is a micro-invasive percutaneous procedure that uses the laser light transmitted by the applicators (optical fibres) for a few minutes. This heats the targeted tissue and causes irreversible “in situ” damage, therefore with no need to remove it.

This is all thanks to the combined action of an encrease of the local temperature and exposure time. The interaction of the laser radiation with a 1064nm wavelength (within the range of the therapeutic window) provided by ECHOLASER is excellent, offering low radiation absorption and excellent light penetration. The laser light is conveyed by the source to the tissues through extremely flexible quartz optical fibres with a small diameter (300 micron) and a flat tip, which are inserted percutaneously with fine needles (21 Gauge).

Through the flat-tipped fibres, the EchoLaser Thermal Ablation produces a coagulation area (area where the tissue is irreversibly damaged) with an ellipsoidal shape.

The intrinsic features of Laser (coherence, collimation and monochromaticity) and the penetration method of the laser into the tissues (depending on the wavelength) make the EchoLaser Thermal Ablation a successful choice. 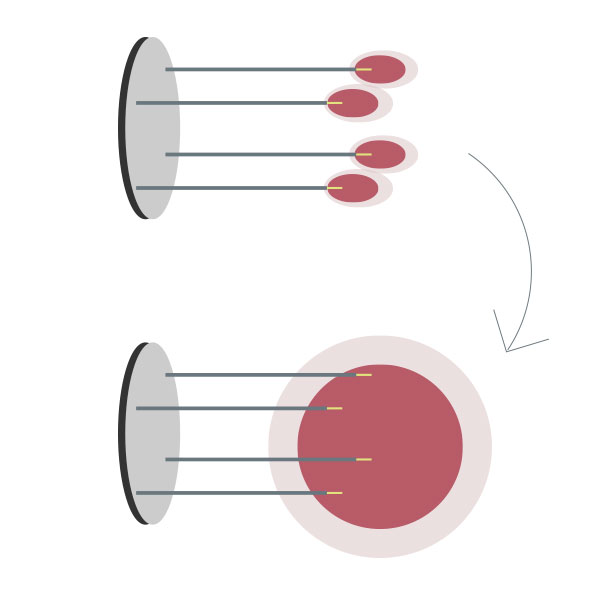 Compared to other ablative techniques, ECHOLASER provides greater safety and effectiveness thanks to: